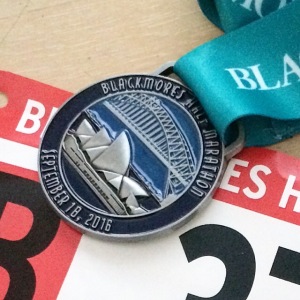 It was a little surreal. Thousands of pairs of legs moving slowly towards the gate. Like the wheels of a locomotive gradually gaining momentum, the pace quickens just as the strips were crossed. My first half marathon commenced. Multiple beeps of wrist devices cheered us on as the strips invisibly recorded our official start.
We rounded the first corner and the runners washed around the bend like a river meanders. Right, here we go. What did I get myself into? I had trained for this single race for the last nine months and mentally psyched myself to sign up almost 12 months ago.

I felt a kind of euphoria and exhilaration, running in my debut half marathon as I’m sure hundreds of others were. Many don’t look like they’ve trained for any length of time. I expected to see far fewer runners and they would be physically svelte and toned – most were, whilst about a third were carrying evidence of their Winter indulgences and visibly heaving as we traversed the iconic Coathanger. Wow! I am doing it! The Sydney Harbour Bridge, Lane 4. Thoughts meander to the significance of this in my existence. Where vehicles traversed daily without regard, the throng now owned this moment.
Too early for crowds, we were only encouraged by the odd event photographer or two. The shutters clicking as I ran by – do I look good in that photo? Others may look better. The one or two diehard friend or family cheered a runner or two.

This was crowded beyond my expectations. Hurtling down the off ramp and the throng bunched again with runners managing to scamper round the tight turn. Seriously? Runner etiquette was not common today much as gladiators charging towards their prey with single-minded purpose. I am and was serious – I want to finish what I started and prove that I am a runner.

Five K’s down and I need to pick up my pace to smash my sub-2 hour goal. With bodies weaving every which way and feet crossing each other, it was a challenge to run at my own required pace. I needed to achieve a happy medium. The scenery changed and the water station was fast approaching. In mid stride I grabbed an energy gel pack from the back zip pocket. I needed to keep my strength up. I consciously gulped down the gel in a couple of swallows in-between breaths. Now I needed to get a drink to keep hydrated and to wash down the gel. Bodies ahead had slowed right down and were beginning to bunch up like an accordion. This was the sign of the water station. No warning at all except for slowed or stopped runners. Then came the discarded cups on the tarmac. I grabbed the closest water and paused to drink it down. The body had such amazing synchronicity managing air and water gushing down the oesophagus but diverted each resource to its destinations.

No time to think, I pushed on and managed not to trample or get tripped up by the growing number of cup carcasses. The elevation eased as runners hurtled on a downward slope towards Circular Quay. The Sydney Strider pacer was heard several metres behind yelling, “Long strides, long strides! Take back a few seconds on the down slopes!” Whilst I have him behind me, I shall get my goal. The gel had kicked in and we’re almost halfway. The mind wandered and I reeled it back to do a mental check – legs comfortable, no issues; lungs and breathing, regular and steady; core and stomach, managing the stress but no stitch.
Ten K’s came and went. I’m back on target. The number 16 this time, as it was printed in white bold digits on the back of a turquoise shirt about three metres ahead. I was in pursuit of 16 down Pirrama Road and around and around the twisty, windy route in Pyrmont. The route opened up and we were back out. Runners, hundreds in number, hurtling towards us on the opposite side of the road. Keep left! Damn it! Something to see here, the Australian Maritime Museum, then I was a tourist in Darling Harbour. I ate at that restaurant. I was at that spot watching buskers. The privileged and their yachts. A few breakfast clubbers stood along the King St Wharf eatery strip and watched us as if inspecting our forms. Mmm. Breakfast was a memory now as bacon aroma tickled my nostrils.
What the heck am I doing? I could have been in bed. Banish that thought! This was what I wanted and this is what I got. 16. 16. She’s still ahead. Another ‘accordion bunching’, I shall call it that; the slowing and bunching of runners around bends and corners as their feet scampered to avoid tripping.

What?! 18! The square bold sign approached. The pounding of rubber and synthetic soles around me seemed louder now and more desperate. Sweaty sticky bodies passed each other. Some faltered whilst some excelled. Which group am I? I felt drained as my thoughts wandered to my pacing. I think I can. Yes, I’m sure I can. I breathed in deep with each heaving of my damp chest. Let’s do this! It’s another 2-plus K’s as I passed another faltering body. Another straight, a right turn, under the Bridge, the towering pylons. I’m in a mindless stupor now. My body was now weak to the instinctual commands of my brain. It kept going. I’m glad to go along with this. I’m suddenly running on the timber boardwalks, another turn and I entered the gate to the pier of giants cruise ships, except none were berthed. It was an open straight as I spied ferries in the Quay and the Opera House opposite. The pounding of my shoes were hammers to an anvil now.

My movements were frantic as I made one last bend to the straight in front of The Toaster. The sign said, “Tap here for Power”. As I tapped the explosion image, I felt a renewed surge and joy of almost reaching the end. The pace quickened for me and many others. We were cheered on by onlookers and families lining the final two hundred metres. The crowd was three to four bodies deep forming human walls on either side of the route. As runners neared the final gentle turn, the finish gate came into view for the first time. More cheers and applause were heard for the last time as I crossed under the gate and caught a glimpse of the yellow digits of the rectangular timing clock. I’m done but not spent. Home. I achieved my two main goals – to run the 21.1 kilometres of this beautiful harbour city and in a time of under two hours. Elation, joy, relief, exhilaration. A flood of adrenaline-fuelled emotions came rushing as my body celebrated whilst I managed to hold back a tear. I have arrived. Seriously. I am runner.

One thought on “The First Half”